MANY first-time buyers may be looking to get on the property ladder thanks to low mortgage rates, plus lockdown may mean they’re able to stash away more cash then usual if they’ve not been furloughed.

The freedom of working from home and the prospect of being able to do so in future may also leave some thinking about fleeing expensive rents in the city for cheaper monthly mortgage payments elsewhere.

But first-time buyers may find their options limited as lenders have pulled hundreds of cheap deals for those with a small deposit in the first few months of the pandemic.

“First-time buyers and those with small deposits should not be discouraged to apply for a mortgage right now,” Rachel Springall from Moneyfacts.co.uk told The Sun, “but they may find a lack of choice”.

Many lenders are focusing their efforts on existing borrowers who’ve taken mortgage holidays due to the crisis, but Ms Springall expects deals for those with small deposits will return over the next few weeks.

She added: “It is expected that mortgage lenders will slowly go back to their usual lending practices, but it will be slow and steady.”

It’s all well and good spending hours searching on Rightmove for your dream home, but it’s a waste of time if the places you’re looking at are way out of your price range.

Lenders reject unrealistic mortgage applications and that in turn will damage your credit score and make you worse off.

The most you’ll be able to borrow is four and a half times your yearly salary, which will give you some idea of your budget.

These are the types of homes you will be able to afford on that budget across the UK – although none of them are in the South East.

There are a number of different free mortgage calculators that you can use including MoneySavingExpert and the MoneyAdviceService.

The world of mortgages can be a complicated one but shopping around for the best deal could save you thousands of pounds a year.

Mortgages with low interest rates are obviously the most appealing but lenders will only offer the best deals to the most risk averse borrowers based on affordability checks.

You’ll also need to think about more than just the interest rate when looking for the right home loan – some lenders will charge a fee to take out the deal which could push up your monthly payments.

Plus, there are a range of different types of mortgage to choose from which will affect your monthly payments – from fixed-rates to variable rate deals.

Then there’s the incentives to think about – some lenders offer free valuations and cashback to help cover the expensive costs that come with buying property.

It’s important not to be sucked in by all of the perks and to make sure you really are getting the best deal.

Here, we take you through the different types of mortgage and find you the cheapest deals to help you get an idea of what you can afford.

The size of your deposit will affect the rate a lender will offer you for a deal.

The amount that you need to borrow on top of your deposit is called the loan to value (LTV).

Generally speaking, the lower the LTV, the cheaper the rate – so the bigger the deposit, the better the deal.

It is actually possible to take out a mortgage with a 0 per cent deposit, but you’ll need to secure the loan against either your parents’ house or often their savings.

These types of deals are risky though because if you can’t afford to pay your mortgage one month then it’s your family’s home or savings that will take the hit.

The money will be locked away for five years but you will earn interest on it.

Buyers will be charged 2.95 per cent on the mortgage compared to the next best deal from Mansfield Building Society, which charges 3.89 per cent on 100 per cent LTV deals.

GETTING on the property ladder can feel like a daunting task but there are schemes out there to help first-time buyers have their own home.

Help to Buy Isa – It’s a tax-free savings account where for every £200 you save, the Government will add an extra £50. But there’s a maximum limit of £3,000 which is paid to your solicitor when you move. These accounts have now closed to new applicants but those who already hold one have until November 2029 to use it.

Help to Buy equity loan – The Government will lend you up to 20 per cent of the home’s value – or 40 per cent in London – after you’ve put down a five per cent deposit. The loan is on top of a normal mortgage but it can only be used to buy a new build property.

Lifetime Isa – This is another Government scheme that gives anyone aged 18 to 39 the chance to save tax-free and get a bonus of up to £32,000 towards their first home. You can save up to £4,000 a year and the Government will add 25 per cent on top.

“First dibs” in London – London Mayor Sadiq Khan is working on a scheme that will restrict sales of all new-build homes in the capital up to £350,000 to UK buyers for three months before any overseas marketing can take place.

Starter Home Initiative – A Government scheme that will see 200,000 new-build homes in England sold to first-time buyers with a 20 per cent discount by 2020. To receive updates on the progress of these homes you can register your interest on the Starter Homes website.

If you have a 5 per cent deposit, the cheapest deal is with Nationwide.

The next best deal is 3.19 per cent also with Nationwide but you won’t have to pay the up front fee.

The cheapest offer is on a two-year fixed deal with HSBC at a rate of 1.79 per cent and you’ll need to fork out £999 to take out the deal.

Nationwide offers the same rate on a two-year fixed deal but you’ll need to pay a one off fee of £1,495 when you complete.

If you’ve managed to save a 15 per cent deposit then you should look at a different two-year fixed with HSBC at a rate of 1.49 per cent.

Remember though, the deal with the cheapest rate might not be the right one for you and it’s recommended that you look at everything the deal has to offer before taking one out.

Fixed-rate deals will give homeowners security over a set period of time as the amount of interest you’re charged won’t change for the term of the mortgage.

Meanwhile, bill payers can usually benefit from a rate drop if the Bank of England slashes the base rate during the mortgage term if it’s a variable rate deal.

We take you through the different types of mortgage and the cheapest deals, based on those with a 10 per cent deposit.

Fixed deals offer homeowners the security of knowing exactly how much they’ll pay every month throughout the term.

But if interest rates go down, you won’t feel the benefit.

The other thing to consider is how long you want to fix for.

Taking out a longer deal may be cheaper in the long run, but you could also end up forking out for heavy early termination fees if you move house or need to cancel the mortgage before the deal ends.

Opposite to fixed rate deals, variable deals can move up or down.

There are three types of variable mortgage; tracker, standard variable rate and discount rate, the pros and cons of each varies.

Typically, the most expensive deal out of all three are the standard variable rate packages, and borrowers usually end up on them when their fixed deals have come to an end.

The interest rates follow the base rate but are usually between 2 per cent and 5 per cent higher.

We’ve not included them in our round up because they’re not available for first-time buyers.

These deals are a discount of the lender’s SVR and last for a fixed period of time, typically two or three years.

If interest rates are cut, your payments will be smaller but if they rise you’re likely to face bigger bills.

You’re also at the hands of the lender as it relies on the SVR rate, which can be hiked at any time.

Fees: 0.75 per cent of the amount you borrow in advance

Tracker mortgages move in line with the base rate, which is great if the base rate goes down but you also run the risk of it going up which will have an impact on your bills.

You’re also usually locked into a term so if you’re already paying above the base rate and then it goes up, you could end up forking out hefty charges for the duration of your deal.

For first-time buyers looking to borrow 90 per cent LTV, these rates are more expensive than fixed rate deals.

Where to buy the cheapest hanging egg chair – including Aldi, Wilko and B&M 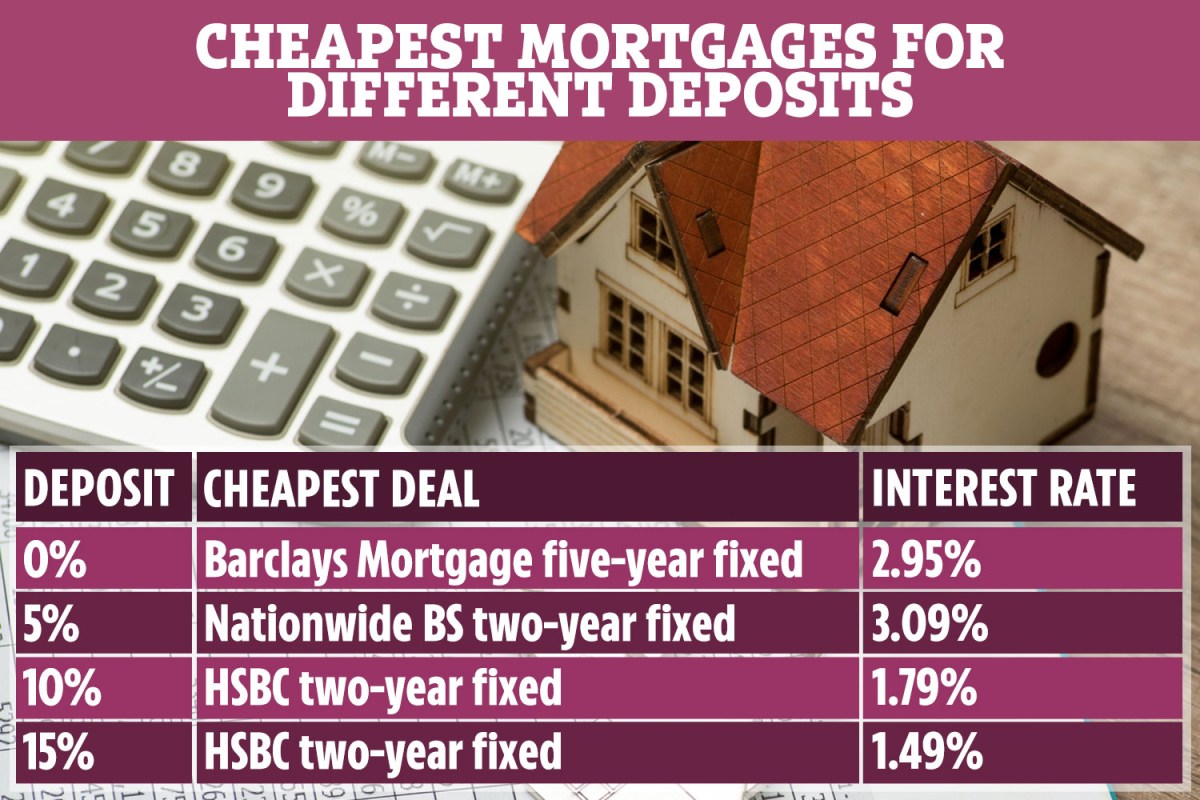